The week gone by

Monday's already been covered in the previous entry, I think... So let's get to new things.

I start a scarf. The timing for that is indeed a bit off because the Lankahamsterit stash reduction project starts the next day and I am not allowed to count the yarns used for the scarf to my end result. Well, nevermind.

I make it to the Etnoneuleita class (Ethnic knits) that started already last week. During the 8 sessions we design and knit our own ethnic knit, that is, something based on old Finnish or Baltic patterns. Most of the people are knitting mittens so I thought I'd be a rebel and knit socks.

We also try some new techniques. I learn the Kihnu vits stripe which you do by purling with two colours with the yarn in front of the work and twisting the yarns by switching the colour after each stitch.

On Wednesday my new life starts in two other ways as well. I begin working in a new project with a new customer (I still work for the same old company, though) in the center of Helsinki. Too bad. You see, there are three yarn shops within a walking distance. (Haven't found any fellow knitters yet but there is at least one cat person.)

However, as the Lankahamsterit also starts on Wednesday, I am not supposed to go yarn shopping. Too bad.

I get mail from Tuulia. I sent her the white Schulgarn from my stash and she sent me these yarns in exchange. You will see later that the light blue alpaca yarn already wanted to become a scarf, that is, another Icelandic scarf, Litla Hyrna Huldu (Hulda's small scarf?), from the book Þríhyrnur og Langsjöl (Three-Cornered and Long Shawls). The lilac yarn wants to be felted slippers.

The scarf I started earlier this week is now ready. It took two 50 gram balls of Novita Havaji yarn (acrylic!) and did not turn out the way I had planned. It looks nice, though. The pattern is from Ulla, designed by Helka and called Autere. 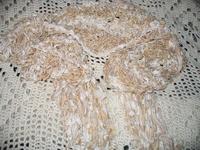 Saturdays are nice when you do not have to do anything but knit...

The Litla Hyrna Huldu scarf is ready and needs some blocking. It's lovely! The actual implementation is my own because I was not able to understand the Icelandic pattern so well that I could have figured out what to do after casting on the necessary 118 stitches. So, I did it my way and it looks pretty much the same. 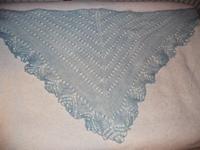 The scarf is really small, it'a sbout one metre wide. It's not even close to the scarves I've knitted earlier, no, this one is small and cute.