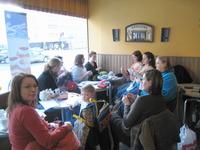 As the previous entry, the picture above and the blog entries by Pilvi, Sari and Marianne tell, we spent a weekend in Turku.

We went to see the viking musical (yes, a Finnish musical about vikings) Thorin vasara (Thor's Hammer). Jussi will tell more about the musical. I can just say that if you take a man (or several) who can sing, give him leather pants to wear and make his hair messy (or wig, that's not so important), I'll keep on drooling for quite some time. (Jussi felt jamesbondish in his new suit and didn't look too bad either. Have the cake and eat it, too, right?)

EDIT: Photo courtesy of the City of Turku Mediabank.

The musical was good. Sometimes the singing was a bit more like mumbling when many people sang at the same time and the style of music varied from tango to rock and the basic musical stuff. None of the songs rose above the others, but who cares, the musical was good and got better all the time after the slow start - and did I already mention that the guys wore leather pants? What else could a woman want? (Monty Python spam sketch vikings? No??)

Presents, of course! Look, what Eero gave me in the knitting meet-up. He was a charming young man and this is a charming card, isn't it? 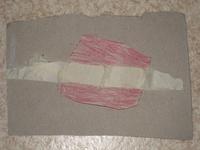