Yesterday was supposed to be a fun day: first I was supposed to meet Susanna and Ninni and then Jussi and I were supposed to go to the movies to see Wallace and Gromit. Well, no, that did not happen. Here's the reason for no knitting content: 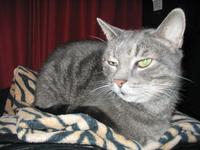 I know, I haven't told about Frank that much, so here are some news. Yesterday I had to take Frank to the vet (again) and there he got some more antibiotics (again). This time we have to give him those for 15 days, twice a day. Apparently the earlier fights were not enough and we have to keep on torturing all of us... This morning Frank already bit Jussi's finger as we tried to make him swallow one pill. Frank's such a clever cat, he must know at least a dozen ways of hiding a pill in his mouth without swallowing it so he can spit it out the moment he can.

Giulia: thanks for the advice! We tried some antibiotics paste/liquid earlier but it was difficult to get Frank to stay still when you wanted to inject all of it. That took two people also and that's why we decided to try pills this time, maybe they would be easier as a pill is smaller. We'll see how it goes...

awww, poor kitty :/ hope he'll be well soon, my cats send meows and purrrs to the furry patient.
i'm surprised your vet gave you pills, it's nearly impossible to have a cat swallow them without being absolutely unconcerned to shove a finger down its throath. and i've seen quite a few in all the shelters i used to work. however you can try with a pair of big tweezers with a large round nose to help you. instructions: human A holds the kitty firmly by the neck so that he opens the mouth, human B blocks the yaw with thumb and index finger of the weaker hand (left if you're rightie and right if you're leftie). with the tweezers in the other hand human B positions the pill down behind the curve of the tongue, then closes kitty's mouth and holds it closed while rubbing its throath to force it to swallow. human A makes soothing and reassuring comments in perfectly calm voice all the while but never relents the hold on the cat. if kitty's mouth gets dry, keep a syringe (without needle) handy and inject carefully (always from the side, never directly in the mouth ) a tiny bit of water to ease the swallowing. the smoother you can keep the process, the less angry the cat.
hope it helps, again best wishes for a speedy recovery to frank :)