Santa Claus is coming to town

I sent a parcel for my colleagues today. Hopefully it gets to them soon... (The cat was not included. Mini just loves the ribbons.) 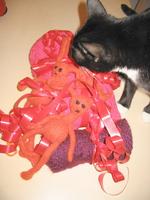 You've already seen the Faroese scarf. I decided to do a fringe after all but as I could not figure out how to do the fringe in the pattern, I just did something. 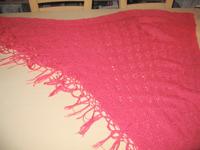 I also finished the birch-patterned scarf from Hjertegarn Rivi. One 50 g ball was enough for a 24 cm wide and 180 cm long scarf. 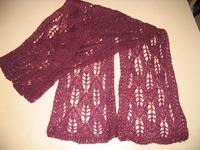 Then I decided to knit two bunnies because I seem to give these to everyone working with me...

These are made of the dark orange Maali yarn I bought from Tallinn quite a while ago. It felts quite nicely in 60 degrees in our washing machine and as I stuffed the bunnies with some yarn, they turned out to be nice ans plump.