Today is Finland's 88th Independence Day. To celebrate that, I'd like to introduce this book I bought a while ago: Ompelu- ja nauhakoristeita by Theodor Schvindt. (Roughly translated as "Decorative embroidery and ribbons".) 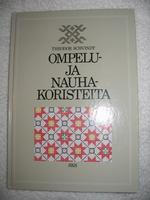 In fact, the foreword of the book is dated December 5th, 1893 so this book was originally put together before Finland was an independent country. I got the third edition, published more than a hundred years later in 1992 by Suomalaisen Kirjallisuuden Seura.

Theodor Schvindt was a Finnish archeologist and ethnologist, born on October 13th, 1851 in Räisälä. He came from Karelia, and he studied the area thoroughly and published many books, for example, of the Käkisalmi castle. he also participated on journeys on which people studied the traditional costumes and wrote down old poems and stories and did a remarkable job in reconstructing traditional Finnish costumes.

This book describes the decorations and their names orthodox Karelian women from the towns of Sakkola and Rautu have embroidered on their head-dresses. The patterns have remained the same for 600 years or more, and this book documents them so that they can be further reproduced in embroidery - and in knitting as well. 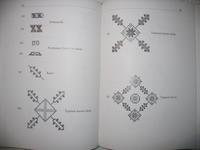 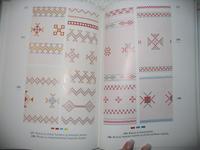 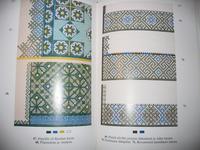 The book also includes pictures of embroidered ribbons that could be sewn on clothes or used as belts or for many other purposes. 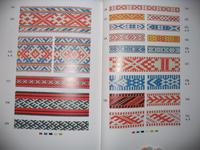 I love this book! I love traditional patterns! I first saw this book at the Book Fair. It was an earlier edition which looked a bit worn and for a moment I did think of spending 150 euros for it. I did not, though, I just wrote down the name of the author and did some googling. I found this book via Antikka.net for 20 euros and it's worth every cent.

Hi!
Nice book you have there! I hope you enjoy it.