Last weekend I went to the Kädentaito 2005 fair on both Saturday and Sunday. On Saturday I dragged poor Jussi with me because I wanted him to meet Anne before we travel to Belgium. (We're going to Brussels later in September.)

Anne had come from Belgium and boy, they have all kinds of dangerous things abroad. "Psst, wanna buy a book?" she said. "The first page is free. Do not believe your parents, reading is not bad for you even if they say otherwise. You can control it". Of course I wanted to buy the book. 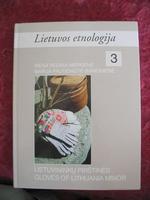 It's a book about Lithuanian gloves and it's got many pages full of lovely fairisle patterns.

To be honest, Anne did not say "Psst, wanna buy a book" etc., I just had to make it sound a bit more interesting. But, the addiction to books is true and maybe I'll soon be moving from pocket books to - gasp! - hardcover books...

Jussi & I did not take a good look around, we tried to head straight to the café where aAnne was waiting when we got to the fair. At the café a lot of people gathered together (hopefully I did not forget anyone): Anne (another one), Jenni, Minna, Sirpa, Susanna, Terde, Sibylla from Novita-klubi...

(Ninni, I left you out on purpose. I'll get to you later.)

Luckily Susanna and Jenni kindly informed us, or me, that there was Colinette yarns available at the Pemmikaani booth. There we went! It's good that we did because on Sunday the delicious pink and some other yummy colours were gone. I got some Point 5. 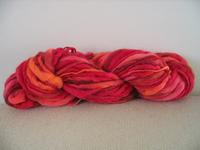 Jussi wasn't that interested in yarn or handicrafts and, after all, I was supposed to go back on Sunday, so we took Point 5 to pizza. 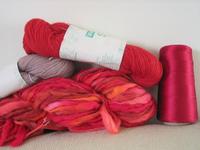 The Point 5 did get some company on Sunday when I was let out to roam on my own. Niina and I had planned a trip to the fair but unfortunately she got sick, so I e-mailed Kristel and there we went.

What I had been waiting for was Ninni's speech on when a family member goes crazy over knitting. It was a fun speech and oh, so true. Afterwards Ninni and I walked around the fair and as you can guess from the photo above, I bought more yarn. 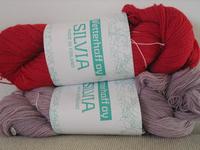 On the left Wetterhoff's Silvia, the same yarn you might have seen in other blogs. The discontinued colours were on sale. On the right some 100% silk yarn from Silkkituonti Sorri. Kristel was able to resist it, I was not. Would you believe that such a tiny cone has 1300 metres of silk yarn?

When I came home the following discussion took place:

He is way too smart - but not smart enough to give me money...