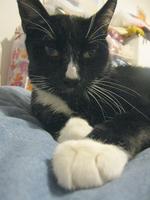 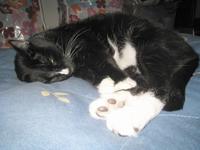 Maxi says that his socks are the prettiest - and that for a piece of ham he'd do just about anything (hint hint). 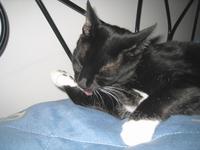 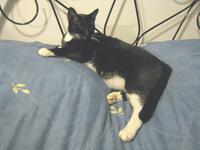 Mini would like to remind you that his socks are also very pretty (his ankle socks and his knee socks), if not even prettier than his brother's. 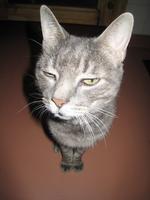 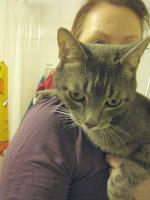 Frank does not care about socks but announces of being tired of the wide angle lens tricks and having a huge head in each picture. He'd rather be mommy's cat. He still sprays (yuck) and at the moment he's on special diet. Soon it's time to take a blood test and see if the diet has worked or not.

May I also complain? Have Interweave Knits and Vogue Knitting changed postmen? Has the Bermuda triangle changed its preferences or is there a knitting magazine eating monster living in the Atlantic Ocean? Earlier Vogue Knitting came promptly and Interweave Knits did not. Now there are no problems with Interweave Knits, but I have had to report the two latest issues of Vogue Knitting as missed. First they extended my subscription with one issue and now they promised to send a replacement copy that should have arrived in 3-4 weeks. After 7 weeks it had not arrived and I complained again. They're sending another replacement issue that should arrive in... yes... 3-4 weeks. I wonder what's going on and if any Finnish subscriber has received her magazine in time.