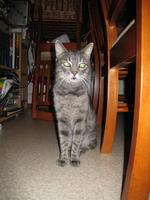 Due to the lack of knitting content, the cat picture show continues and I take this chance to tell how Frank's doing.

If you have been following my blog, you know that over a year ago Frank started suffering from stones in his bladder, or, that's what we learned later. Anyway, Frank started meowing loudly and spraying, so we took him to the vet. We took him to the vet again. We kept on taking him to the vet and they could diagnose the infections he had in his urinary tract, but not the stones. The stones caused the infections but because the vet could not see them in the urine sample, she was not able to tell us what is wrong.

Last spring the situation got bad. One stone got stuck to the wrong place and we had to take Frank to the pet emergency clinic because he was not able to urinate. He was in intensive care for one night - and that's when he was diagnosed to have stones in his bladder. They were visible only in the ultrasound. I do not recall the vet telling us that we could try an ultrasound or x-ray to further investigate Frank. It may be that she did. It may be that she did not. Anyway, we decided to take Frank to another vet. In the first place Frank was like possessed anyway and they had written in big letters in his card the word "Beware".

This summer and autumn have been a busy season for Frank. He was tested. He was tested a lot. The new vet first took an x-ray and urinary samples to see what's going on and then more urinary samples, blood samples... Frank had more infections and it seems that he was constantly on antibiotics for longer and longer periods. At one point the tests started showing alarming results of the condition of his liver and the results just got worse when we took Frank back for a control blood sample.

We changed his food to food that maintains the functions of the liver and kidneys. I think that was a mistake. Frank's bladder stone problem got worse almost immediately and he got another infection. Also, the problems with the liver continued.

That's when the vet suggested taking a sample of the liver for a proper diagnosis in case there is something wrong. I just haven't had the heart yet to take Frank to the vet for that yet. I want to believe that his liver is getting better and the results were just due to the antibiotics and bladder stones.

There have been no changes in Frank's condition, he's been the same cat all the time. He hasn't looked ill or shown that he's feeling bad (but cats are good at hiding that) so I just cannot believe that Frank could be seriously ill. He's just been meowing more but that's understandable. Maybe I'll have another blood sample taken and if it still gives bad results, then we have to have the liver sample taken.

Keep your thumbs up and hope that my poor baby is getting better.

I had a cat with this problem many years ago. They split the urethra open and stitched it back to make a larger opening. Sorry, it's been long enough that I don't know any more details than that. The cat did live to be 17 and died of old age (he managed to survive a rattlesnake bite many years previously.)

Ask your vet if there is any way they could do an operation like this.