First things first: I'll get back to the silk scarf details later as the scarf is still unblocked and I have no new pictures of it.

Anyway, yesterday Niina and I took Hema (remember my colleague?) to Tallinn with an ex-colleague of mine, Jaana. We left on the 10.05 ferry. On the way to the terminal Niina told us that the 8.00 ferry had been cancelled and the wind still seemed hard, so we wondered if the 10.05 ferry would go at all. It did, and I guess they squeezed some of the early travellers in there as well because it was full. We managed to get seats from the rear end, no table however and we all had to sit side by side.

The ferry arrived late in Tallinn because they had to slow down due to the wind and all in all, the journey was rough.Let's just say that a lot of plastic bags generously handed by the personnel and many stupid jokes and catch phrases including "close your eyes and think of England" and "be pretty when you puke" were involved and that I ate my breakfast in vain and that I got a lot of symphathy also from the people near-by. By the way, does anyone remember what was the cure the Mythbusters found for seasickness?

So, I decided to reward myself with yarn. Actually, what I really wanted to do was to go home and get back to bed but since I was in Tallinn, that was not possible. 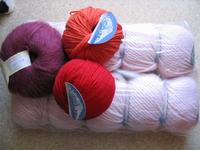 So, what exactly does a knitter buy after suffering for almost two hours? Kashmir and silk, of course! 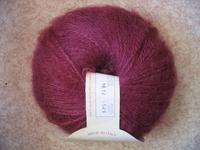 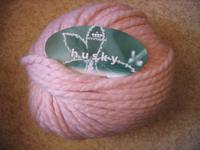 The first yarn is the yarn I bought last. It's BBB Contessa, a mohair and acrylic blend, from Filati on Müürivahe 20. It just wouldn't let me go, so I got three balls of it. Maybe it'll be a scarf.

The other yarns are from Liann Lõngad on Narva mnt 13. The red and orange yarns are Himalaya by Emmebi, 90% wool and 10% cashmir. If it's red and it's got cashmir, it's mine. The pale pink yarn is Husky also by Emmebi and it's 60% wool, 40% acrylic. I wanted a burgundy colour first but it was misplaced somewhere in the shop and the rest of the balls were not to be found as were the rest of the dark pink balls, but this pale pink is actually quite lovely.

Misplaced is also the cherry red silk yarn (129 kroonis, I, think, so not that bad), also from Liann Lõngad. I got two balls of it just because I'm worth it.

The way back was not that bad. We had a nice dinner at Controvento ("Against the wind") and went home against the wind... What a bad pun! Anyway, we got a place in the middle of the ferry so I just felt strange but not nauseous. And now I have to go and find my silk yarn!