What can I say? Prague was wonderful. I did not want to come home. We arrived in Prague on Saturday and left on the 11.30 flight on Tuesday. 11.30!!! That's way too early.

Way too early especially when your taxi driver gets stuck in the traffic and you have your Diner's Club card burning in your purse screaming "lounge, lounge" and when you get to the airport you realise that the queues are a mile long and you already have to go to the gate and you do not have much time for last minute souvenir shopping, not to mention for spending some time in the lounge with a free drink and a free snack... 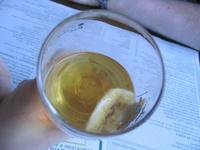 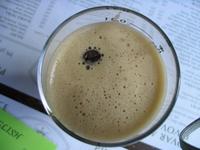 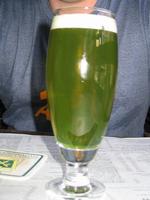 From left to right: banánové, kávové and kopřivové - that is, banana beer (you can see a slice of banana floating there), coffee beer (there's a coffee bean) and the lovely green stuff is nettle beer (no leaves floating that time).

In addition, the bar had blueberry beer, sour cherry beer and wheat beer. Wheat, how amazing. If you want to try these out, they're available at Pivovarský dùm.

Even if you walked there from across the old town in 30 degrees Celcius, it's worth it. (Hey, next time I go there I could ask for free beers for this ad!!!) 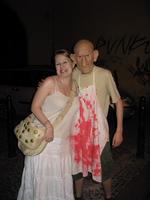 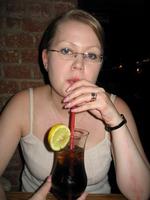 On the left my new best friend, the ghost of a butcher who was doomed to guard the old church. On The Ghost Tour we met also another ghost - funny how all the ghosts in Prague look like they're wearing rubber masks but I guess that happens when you are forced to haunt people and places for centuries.

In the middle I'm having my traditional Long Island Ice Tea at a lovely Medieval restaurant called Cartouche. You need to prepare for The Ghost Tour!

On the right the ghost of Darth Vader... Or actually that's a knight who only comes to life once in a hundred years (next time in 2009, if I remember correctly, or 2008 or something) and tries to find a virgin who can rescue him by spending the night with him - this guy was a bit short-tempered and killed his fiancé because the neighbours said she had been unfaithful when he was away and that's why he turned to iron. Well, that's what you get for not asking your fiancé first.

Talking about medieval restaurants... On our first night, we went for dinner to a place called U Sadlu. If you're planning on going, print the menu in English from their web site! They have menus only in Czech there.

However, our waiter was very friendly and gave us recommendations, so we took the Mixed Plate that was "big enough for two". It was huge! Halfway during the dinner Jussi pointed to me the four people who were sitting across the room and said that they were sharing one plate, the four of them. Also, in that place you did not have to ask for a new beer, they automatically brought you one when they saw you were finishing the previous one.

Well, like I said, it was hot and all I could think of was cold water and having enough to drink (the water, that is) but we managed to do some shopping as well. I knew there were at least three yarn shops in Prague. One I missed, it was supposed to be on Spálená 35 but I did not see on the way to the pub mentioned above... Could be that I was just too tired to spot it.

Well, the first one I saw was near the castle, but it was closed on Sunday and we did not feel like going back on Monday. The place is called Textilní Galanterie and it's located on Trzište 6. So, nothing from there but the pictures. 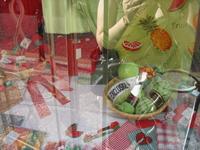 MarLen is located at Karolíny Světlé 12. What an amazing place! They do not only sell yarns of their own brand but the place is full of fabrics, and I mean full. 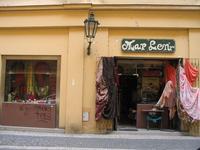 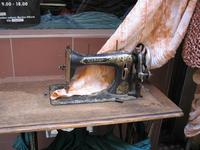 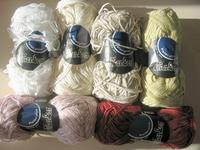 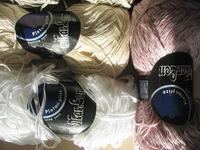 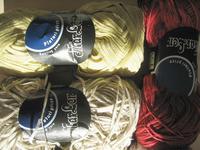 These are all 100 g balls of cotton or viscose or blends. It was so hot that I did not want to look at wool or mohair! I got two balls of each of these, so 12 balls of yarn altogether. I think they will be scarves. The prices were from 50 to 77 korunas per ball, about 2-3 euros. (1 euro = about 27 korunas)

Could I have the Czech, please!

My latest addiction are beads, and as we were in the land of crystal, there were beads all over the place. 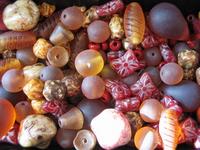 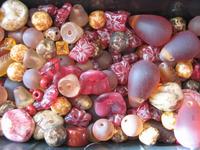 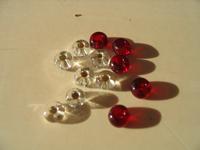 I saw the beads in the first two pictures on the alley near the castle where they sell all kinds of souvenirs and of course I had to get some. They were only 200 korunas for a 250 gram bag! I don't know if I try to make a necklace or a bracelet or if I try to combine those beads in my knitting. The crystal and red beads I will combine in my knitting, I have plans on decorating a scarf. 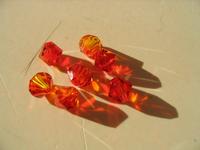 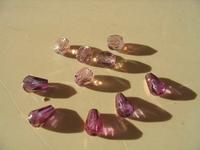 Like the transparent and red beads in the picture above, these beads are from Star Beads which was on the way to the pub also. The orange ones on the left are Swarovski crystals and I just had to get them because the colour was so lovely (7 beads for 60 korunas) and I want to admire the crystals as they sparkle in the sunshine. The Czech crystals were cheaper so I bought the ones on the right for just for the sake of it (105 beads for 60 korunas).