Let's start this by saying that I know that "ye" is not old English and therefore the title is wrong... In archaic English the word "the" was spelled starting with a runic letter "þ" that was later replaced by "th". When printing was invented, "þ" had become obsolete and often missed from the alphabets in the printing equipment. However, the printed "þ" somewhat looked like a lowercase "y", so when old text was transcribed, the letter "y" was often used instead of "þ" whenever it was needed. That's what lead to "ye" being used as a sort-of old form of "the".

BBC tells you more on this.

After the linguistic trivia to the books - I have bought old books mostly for inspiration, they're not all knitting books.

This is something I found from the book fair in Helsinki. It's Ristipistomallejamme by Eeva Haavisto (published in 1955). Eeva Haavisto is also the author of Sata kansanomaista kuviokudinmallia, a book I've owned for quite some time now. The Sata kansanomaista kuviokudinmallia could be roughly translated as "A hundred folklore coloured knitting patterns" and the book does indeed have a hundred patterns for traditional Finnish mittens. This book, Ristipistomallejamme, does not have mitten patterns but cross-stich patterns, the name means "Our cross-stitch patterns".

I did make some cross-stitch or at least something that somewhat resembles cross-stitch to the Silkroad Ultra sweater, but I am not coming out of the embroidery closet and declare myself as a cross-stitcher. No way. I bought this book for inspiration. It contains a lot of patterns you could use in fairisle knitting. The patterns are mostly two-coloured, sometimes three-coloured, and they would make nice stripes. The patterns are not very big, they're mostly maybe 6-10 rows high with some smaller and some larger ones. I think you could also use them in mittens. 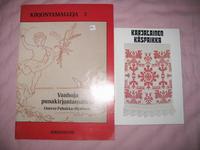 These embroidery books are also a source of inspiration. I got them from the web store of many Finnish used book stores Antikka.net. On the left is Vanhoja punakirjontamalleja by Onerva Puhakka-Hyvönen (1987) and on the right Karjalainen käspaikka (1979).

Vanhoja punakirjontamalleja translates as "Old redwork patterns", that is, embroidery done with red thread. The book is not a that good source of inspiration as the patterns are embroidered with back stitch (I think) and cannot be that easily used in knitting. The book s a nice book and reminds me of the embroidered cloths I saw at my grandmother's place (my mom's mother) - those had many colours, though, but the idea was the same. There were images from fairytales and a girl feeding birds...

Karjalainen käspaikka is a book(let) about the Karelian käspaikka. What is a käspaikka? It could be translated as a towel, as "paikka" is the synonym for, for example, "pyyhe", which means "a towel" in Finnish and "käs" is a Karelian variant of "käsi", "hand". My other grandmother (my father's mother) is Karelian but she comes from a southern part of Karelia so I did not hear of käspaikkas until some time ago. Käspaikkas are used north of where she was born and lived in the Orthodox area of Karelia.

I said that it is a towel. However, a käspaikka is not a regular towel but a special towel as well. It's a long and narrow towel or cloth, usually made of linen. The width may range from 15 to 50 cm and the lenght should be about 2-2,5 meters. There may be longer cloths, though, the book tells about a 7-8 meters long käspaikka.

A käspaikka could be decorated in red with embroidery, crochet, hardanger (once again I could use a wrong word for the technique) or it could be decorated when weaving it. The plain ones were used in everyday household activities for drying your hands, but the better and decorative ones were used in important religious events, for example when bringing gifts to a newborn baby's parents, in weddings and in funerals. Also the icons in the Orthodox homes were always decorated with a käspaikka.

But what about knitting? The patterns in this books are formed of square shapes so they could be used in knitting. Mostly they're squares, diamonds, animals (birds) and abstract figures but if I decide to use a pattern, I thought I would check that it does have a religious meaning. I don't want to be be disrespectful.

But wait, this is a knitting book! I happened to find Biblio which is a good website if you're looking for used and rare books and want to compare the prices.

A Shetland Pattern Book by Mary Smith and Maggie Liddle (1992) has - surprise surprise - patterns from Shetland. I could repeat what I said about the cross-stitch book: inspiration for fairisle knitting. I've seen the patterns elsewhere many times as they have been collected and published in different books many times, but I still like them. Funny how I like fairisle and coloured knitting and I hardly ever do that myself. 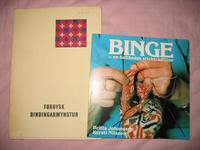 As a linguist, I had to put these books in the same picture because then I could point out the similarity in the sames and the similarities between old Swedish and Faroese (the languages are related).

The book on the left is Føroysk bindingarmynstur (1969) and the book on the right is Binge - en halländsk sticktradition by Britta Johansson and Kersti Nilsson (1980). So, what about the names? In Halland, Sweden the old word for knitting is "bindslöjd" (the dialectal form "binge" is used in the name of the book) and as you can see, the word for "knitting patterns" in Faroese is "bindningarmynstur".

I like both books. Of course, Føroysk bindingarmynstur proves that knitting patterns are pretty much the same in Finland, Sweden, Shetland and the Faroese Islands. I like the names of the patterns - Jussi and I have started taking lessons in Icelandic(!) this autumn, so I like to look at the pattern names and see if they resemble any words we have learned and if I could understand what they mean after studying a whole seven weeks.

Binge - en halländsk sticktradition is a book about the local fairisle style / coloured knitting in Halland, Sweden. The book tells about the history of knitting in the region and it has some patterns as well for sweaters, cardigans, mittens, caps and... ponchos! The binge patterns are traditionally red, blue and white but the book recycles the patterns and uses other colours as well.