Pesto Genovese and yarn, per favore

Jussi: I'd like to reserve tickets to Genoa, to a flight via Munich, please.
Travel agent: I could not find any flights via Munich but there was one via Copenhagen. I have now reserved tickets to Geneve, Switzerland for you.
J: No, not Geneve, but Genoa in Italy. Could you also reserve tickets for Marjut Katajala on the same flight?
TA: Yes, certainly. Just remember that you need a visa and vaccinations to travel to India.

Yes. Genoa, Geneve, what's the difference? Only a couple of vowels in Finnish. Also, the abbreviation for the Genoa airport is GOA, so I started to wonder where our baggage might end up...

The journey started nicely with a glass of champagne on the Helsinki-Vantaa airport. Also the exchange of planes in Munich was OK. We had two hours to spend so we checked the stores to see what we could buy on the way back. So far so good.

When we started to reach Genova, the strong southern wind and the turbulence it caused were not so good anymore. You could only see white clouds and flashing lights outside and the plane shook so much that I had to ask Jussi if the Bermuda triangle actually is located near Bermuda and not on the Mediterranean area... I like flying but then it would have been nice to know how high up we were - or maybe not. But... If you suffer from sea sickness on a boat, is it called air sickness on a plane?

A dump. A rat hole. Jussi's colleague travelled with us from the airport to the hotel and the taxi driver decided to tell her that the area is not very good and that the hotel not a good place for her to stay. Well, what do you know, she did not have to stay there because her reservation did not exist! The hotel was fully booked so they drove her to a mysterious place to the other side of the town.

We stayed at the hotel. A two star hotel - bah. It was a hotel whose reception looked like a storage room. A hotel whose personnel did not speak English well enough. A hotel whose walls had strange holes and the bed cover had a hole burned by a cigarrette. (Note that in Italy smoking is forbidden in almost every public place.) A hotel that was indeed located by the sea but also by the harbour, main railway station and a subway station next to a busy ring road. The noise was awful. We were not greeted by a message on the TV screen in our room but by two (2) towels, one big and one small and a less functional bathroom. The very eager air conditioning went on every 15 minutes. If you opened the tap in the bathroom the pipes started making a "thunk, thunk" noise. I wonder if the pump was reching its final moments. 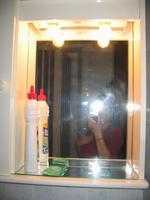 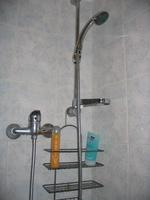 What are you supposed to use for washing - scrubbing cleaner? And what is the used bag of shampoo doing on the cupboard? I even had to screw in one of the light bulbs to get some light. Also, how are you supposed to take a shower when it's installed to a wrong angle and all the water leaks to the floor that has no drain.

Note from the editor: if this was just a cheap hotel where you would drag yourself after doing some hardcore vacationing, I probably would not complain. I complain because this is a hotel listed in the travel agency system and reserved for business travellers. From those hotels you would expect a certain level of quality and not having to express at breakfast as a pantomime the sentence "we need two glasses, two spoons and a coffee cup, grazie to you too".

So we changed the hotel because Jussi's colleague was doing even worse: her hotel / inn / whatever had only one shower and bathroom on the corridor for all the guests and served no breakfast. Our new hotel was located in Rapallo, about 20-30 kms east of Genoa.

While travelling to Rapallo I started to wonder that if a regular taxi driver does 140 km/h when the limit is 80 km/h and the roads are narrow and nobody's heard of keeping the safety distance, why aren't there more Italians among the world's best race drivers?

But Rapallo, oh, Rapallo. Orange trees grew right next to our Hotel Astoria. The sea was on the other side of the street. A near-by restaurant served excellent tuna in balsamico sauce and the most delicious chocolate cake. The service at the hotel and the first impression was so much better that the minor flaws did not matter. There were some stains and dust on top of the hair dryer but I did not mind.

Should I brag some more? Our room had a huge terrace! It was just perfect for having some morning coffee and after that you could walk to the sea and dip your toes into it... 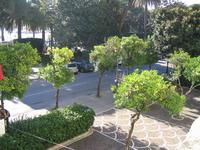 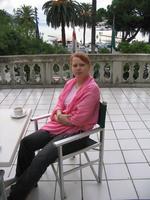 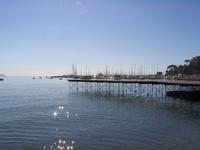 (At this point a slow Häme-born person realised that the sea is actually the Mediterranean Sea and not just any pond. Mediterranean Sea! The palm trees did not grow just for the fun of it there.)

When the hubby is gone...

...it's time to walk all around Genova and get your feet sore, as soon as you get into a local kamikaze taxi or squeeze into an overcrowded Intercity train first so you can climb over people and see that your seat has been reserved also for somebody else. The local trains have more space but it takes one hour to travel from Rapallo to Genova. However, the amazing sights make it worth it: on the one side of the railroad you can see the sea and on the other side the mountains.

But where does a knitter head to in Genova? To a yarn store, of course and preferably by a scenery route. Genova is vertical so the hills cause problems: if you do not take the stairs down in place X, the next chance to get to the crossing street is in place Y many kilometres away and you realise you ended up being as far away from the destination as when you started but in the opposite direction. You must plan your routes well which is imposible to the undersigned, I am well known of being orientationally challenged and able to get lost in my own closet... 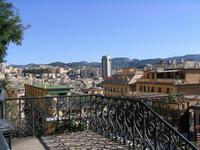 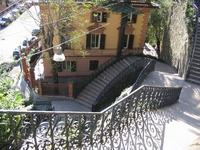 The only way is up

Talking about sights, here are some pictures from the top of the Zecca-Righi funicular: 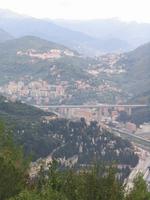 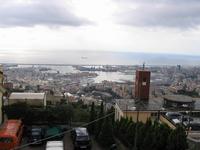 Yarn, give me yarn!

I'm sure that nobody believes that I spent my time trekking on the mountains. No, I also tried to end up in yarn shops. Thanks to Niina's excellent article about Rome (in Finnish), I studied the Italian Yellow Pages eagerly before the trip. According to them there are some yarn stores in Genova and some of them happened to be at a walking distance.

First I tried to find La Matassa (1, Piazza Colombo). The piazza was easy to find. I almost strayed to all the lovely shops on the way - you know all the Italian delicacies, desserts, ice creams, chocolate, cakes...

I found an advertisement on the square and an arrow pointing towards the store but there was no yarn store in that direction! No! I walked round the square (which was fairly small) a couple of times until I realised that there was a sign saying "filati" (but not La Matassa) next to a door and that I had to go in and walk up the stairs to the first floor. I did, but the door was locked and I was apparently supposed to ring the door bell. I decided to go away. Let them keep their fancy yarns! There was nobody else in the shop so I would have had to communicate (yikes!) and even buy some yarn (double-yikes!). However, knowing that the local people did not speak English so well, communicationg could have been at least challenging.

Fairly near the piazza is another yarn shop, La Fonte Della Lana (27/R., Via Galata). 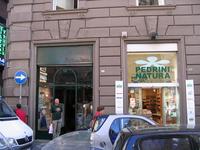 It's the type of a shop where all the yarn is on shelves behind the counter and you have to ask for them. The ladies spoke surprisingly good English and were really helpful - in fact an Australian knitter had visited the store just earlier that morning so they were a bit surprised by the international success.

The yarns were mostly of natural fibres, I think I saw no 100% acrylic yarns. There were some blends, though. I also saw some Noro Silk Gardenia (11,90 euros) ja Kochoran (did not see the price) on one lower shelf... They also had a basket full of knitted samples on the counter which was nice.

Close to the shopping street XX Septembre is Canetta (41, Via Fiasella Domenico). 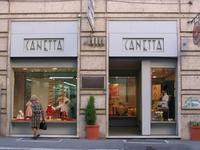 Also the Canetta yarns were mostly natural fibres: wool, merino wool, mohair, cotton, angora... Also the Christmas cross-stitches were displayed! In Canetta they let me go behind the counter and touch the yarns. Maybe that was easiest for the ladies there. They did speak fairly good English and we also reached an understanding:

Apparently they found it suprising that "the English woman" (as I was referred to when another customer came in) know what angora was. Sweet.

And that's not all! I spend the Friday morning getting lost in Rapallo and admiring the small shops, so on Saturday before we had to go I told Jussi that we could buy the souvenirs from Rapallo. We walked around and then this came along: 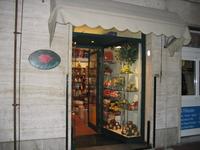 It's a sign of Jussi truly being The Man of My Life - in Riga he just happened to wander to a yarn shop and now it happened again. I did not find the yarn shop alone, I think I just passed it from both sides and now Jussi just turned at a corner and there it was.

The shop is called Rose d'Irlanda (on Vico della Pista) and of course I had to get in there. Oh. The shop was small and you were able to fondle the yarn. Wool, silk, cashmir... ja pitihän sinnekin poiketa. Villaa, silkkiä, kashmiria... The lady did not speak much English but the phrases in my dictionary helped.

The Yellow Pages do say that the yarn store in Rapallo is called Devoti Elisa Marina and that its address is 11, Vicolo Della Pista. The moral of the story is that if a street's name is somewhere close, it's most likely the street you're looking for. If the parts of the name are in a different order, longer or shorter, don't let it fool you.

* Yarns are introduced in the next entry...